On 02.02.2021, we had the honor to visit the premises of our Company, the Consul of Turkey in Thessaloniki Efe Ceylan, as well as, the new commercial attache of the Consulate, Mr. Ahmet Erdogan. They were guided to the factory, where they were introduced to the sophisticated cardboard production. Views on the financial situation of the market were exchanged and it was furtherly discussed the development of the Company and the investments that have been launched during the following years. Proposals for the further strengthening of the trade relations between the two countries, were also discussed, something in which the Consulate and its people, as always, have the intention to support. 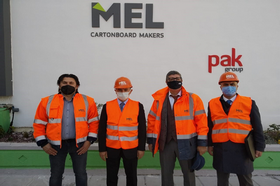